In our previous post on Transit-Oriented Development (TOD), we discussed its growing acceptance and cited specific examples of these types of real estate projects in several areas in which The True Life Companies (TTLC) is actively engaged.  Those areas included the greater San Francisco Bay Area, Silicon Valley and Sacramento, but the idea is quickly spreading nationwide.

As mentioned before, TOD usually includes a mix of commercial, residential, office and entertainment uses centered around or located near a transit station.   Consumers seem to like it, with a 2016 survey showing that 73 percent of Americans would support changing land use or zoning to encourage more transit-oriented development.  TOD can even help improve local economies by allowing both residents and employees to spend more time and money at restaurants, shops, and entertainment activities versus the time and expense of commuting by car.

TOD can also help address the housing crunch seen in the country’s more dynamic cities.  A 2016 report by consulting giant McKinsey & Co. found that by providing density incentives within a half-mile of transit stations, cities and towns in California alone could help developers build 1.2 million to 3 more million housing units.

Following are some summaries and recent examples of what Denver, Colorado, Orange County, and Los Angeles are doing to encourage the growth of TOD. 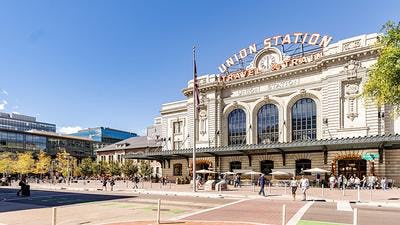 Example:  The central hub of Denver, known as Union Station, has seen 17 projects completed, with 3,000 residential units, 2 million square feet of office, 375,000 square feet of retail, and 725 hotel rooms. Just 6 stops north of Union Station in downtown Denver, a new TTLC property near the Eastlake rail station has been slated for a mix of apartments and townhomes. Part of The Eastlake At 124th Station Area Master Plan in Thornton, CO, this new location is directly across from RTD FasTracks North Metro Rail Line (N Line) and located nearby new commercial and retail space.

Between 2005 and 2018, development around transit stations operated by the Denver Regional Transit District (RTD) -- but not including downtown Denver, Union Station or the neighboring City of Boulder -- has included 904 office properties worth $2.3 billion and totaling 6.9 million square feet of space, and 520 multi-family properties worth $3.7 billion and including nearly 13,800 units.  In addition, RTD’s $500 million investment at Union Station was instrumental in catalyzing $3.5 billion in new development.

Example:  In the center of the county, the Line at Santa Ana is a 228-unit, mixed-use apartment community currently under construction.  Directly adjacent to a future light rail stop, the community also includes 4,000 square feet of retail and public space on a total of 3.9 acres.  Offering easy access to interstates 5 and 405, the project is part of the Harbor Mixed Use Corridor Specific Plan, an initiative that aims to increase public transit and walkability along the Harbor Boulevard Corridor in the City of Santa Ana.

According to the McKinsey study noted previously, one-third of those housing units within a half-mile of transit stations, or a little more than 900,000, would be located in Los Angeles.

During 2016, Los Angeles voters passed Measure JJJ, which requires housing developers in the city to either add affordable housing or pay a fee.  As part of this, the Transit Oriented Communities Affordable Housing Incentive Program gives developers who are planning projects within a half-mile of a major transit stop certain benefits for adding affordable or mixed-income housing to their projects.

Example:  Gensler is partnering with the MTA to redevelop a 15-acre site adjacent site in North Hollywood where the end of a subway line meets a dedicated bus lane.   The project will include approximately two million square feet of housing, office, and retail space. The plan includes a 25% affordable housing goal, new transportation infrastructure, and significant open space.