Insights On Today’s
Challenges to Homeownership

At the end of 2021, the United States was short 5.8 million single-family homes according to Realtor.com. The homes that were listed were snapped up in as quickly as a few days in major metro markets like Denver. At the end of March, Denver Metro had 1,787 homes listed for sale which is an historical low for that area. Lack of inventory drives up the prices of homes that would usually be available to first time home buyers and prices them out of city centers and surrounding neighborhoods where young families would traditionally live.

Supply chain disruptions have caused construction costs to rise but there is another supply chain that is causing headaches for builders: the supply of land. In a National Association of Home Builders survey from late 2021, 76% of homebuilders reported that the overall supply of developed lots in their areas was low to very low. The low supply of developable land today can be attributed to the Great Recession. When the markets crashed “the development of new residential communities came to a halt and today we are seeing the consequences of a relatively prolonged gap in the acquisition, entitlement, and development of land for new residential communities nearly a decade ago”, explains Noah Breakstone, CEO of BTI Partners, a real estate and development firm in Florida.

He goes on to explain, “it can take two to four years, depending on the location, to prep ready-to-build land for new development. This includes securing entitlements and permits”. This can take even longer in supply constrained cities where the land has already been developed for residential or commercial use. Developers are now looking for new ways to build their next residential project.

Meanwhile, there is a retail apocalypse that has shopping malls and strip malls closing due to a change in consumer habits. Much like the pandemic exacerbated the core problems of the housing crisis, the stay-at-home orders accelerated the move towards e-commerce and away from brick-and-mortar stores. According to 2020 findings from Coresight Research, 25 percent of malls in the United States will close in the next five years. Shopping malls can be especially large spaces, typically spanning hundreds of thousands or even millions of square feet. Now, across outlying suburbs and urban centers alike, many strip malls and sprawling shopping centers are vacant. 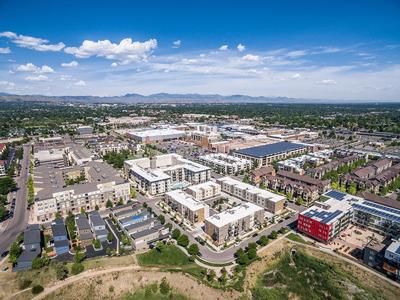 This dynamic has created an opportunity for investors, developers, and builders as they begin to look at these obsolete properties as potential residential communities with mixed use amenities such as retail, green space, and access to public transportation.

In Lakewood, Colorado, the state’s fifth-largest city, a failed indoor mall from the year 2000 is now the vibrant heart of the city as a new development. The city and its development partners replaced the mall with a 22-block, walkable downtown-style development dubbed Belmar, with nine acres of urban parks, nearly 300,000 square feet of office space, street-level stores, and apartments and condos that house some 2,000 residents. The repurposed site has breathed new life into the area and raised property values of surrounding homes.

In Montclair, a suburb of Newark, the town was experiencing economic success due to migrants from New York City buying homes, but the influx couldn’t revive retail downtown. The large Hahne’s department store sat empty with no interest from new retailers, so the city worked with developers to repurpose the building. The empty department store would become a six-story residential building with 101 apartments and 35,000 square feet of retail space on the street level. The town is now moving to redevelop the adjacent parking lot to include 74 more apartments.

While there are challenges in rezoning and getting approval for repurposing these types of properties it is an important process in combatting the housing deficit. The National Association of Realtors has been advocating for legislation that would help the inventory including the Greater Revitalization of Shopping Centers Act, which would provide federal grants to communities to convert underutilized or abandoned malls into housing. There is also the Revitalizing Downtowns Act, which would focus on repurposing office buildings left empty due to changing work habits. Each of these proposals were sent to the U.S. House Financial Services Committee in 2021. However, all have failed to muster enough support to get on the calendar for a vote and are currently stuck in committee3.

Important steps are being taken in the right direction to improve housing inventory. There is opportunity for developers and homebuilders to have a lasting impact on the next generation of homeowners by continuing to innovate and think outside the box. We embrace the challenge at The True Life Companies through our mission: we create attainable housing by repurposing underutilized or obsolete property for a higher and better use, so our children and grandchildren, can live and prosper where we do.