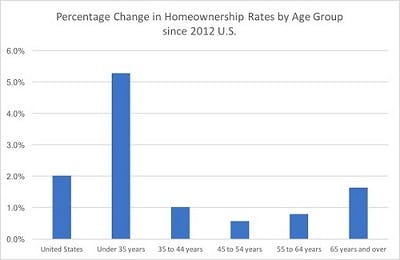 Recent estimates from the U.S. Census Bureau indicate that homeownership is increasing among the population under 35 years of age. Based on research conducted by our TTLC Research Team, since the 2nd quarter of 2016, this age group has seen the highest growth rate in homeownership at an increase of 5.3%, while the U.S. as a whole has seen a 2.0% increase in homeownership over the same time period.

Looking closer at the breakdown among the age groups, we can see that since 2012, the home buying rate for Millennials has pulled ahead of all other generations of home buying age, moving from a rate of 34.1% to 36%. While the rate of increase has a lot to do with the fact that homeownership among this generation is lower to begin with, it’s clear that this trend toward homeownership is now being felt in this segment of the market.

Of course, it makes sense that as the economy improves, and the younger working population begins to find the jobs that eluded them during the recent recession and the slow recovery, their situation and prospects for the future should improve. They can consider starting a household of their own, and as we know, when shifts in household lifestyle occur, changes in homeownership follow. Marriage can lead to the need for more space or relocation, job changes can necessitate a move, and the birth of children can require more space and the focus on a different lifestyle altogether.

It appears however, that rising rents may be one of the biggest contributors to this trend, as reported in this recent article in Builder magazine. These sky-high rental costs affect Millennials even in high paying jobs.

It remains to be seen how the homeownership trend continues. To continue an upward trajectory requires accessible housing inventory reasonably priced with favorable financing options. We know that rising rents, the high cost of housing and the lack of inventory that we’ve talked about in past months has not yet shown measurable signs of abatement. In fact, the increasing interest rates may inflame the situation in the near term, although we believe they can act as a mitigating factor on rising home prices over time.

Repurposing outmoded property in infill locations is one means we believe is answering the challenge. Our team is focused on finding solutions that follow this path.