If the current economic expansion since the Great Recession continues on track through this July, it will become the longest in U.S. history.  However, economic cycles eventually come full circle and many market watchers are wondering what impact the next dip in the cycle would have on home prices. 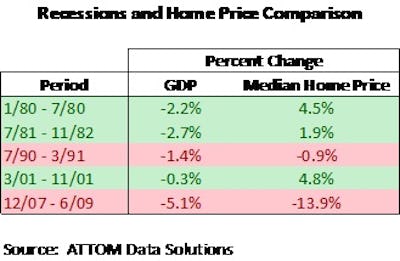 If history is any guide, home prices decline notably only when a recession is directly related to the housing market. Such was the case in late 2007.  ATTOM Data Solutions (formerly RealtyTrac), a provider of real estate data, recently studied the housing market in the five recessions taking place from 1980 through 2009, and in only two cases were home prices impacted, as summarized on the table at right:

In the most recent case, home prices fell sharply because both the scope and the depth of the recession were directly related to chaos in the housing market.  With major sources of mortgage financing becoming unavailable, job losses reaching into the millions, and potential buyers avoiding risk, home prices fell until they found a new floor.  In many cases, that floor was well below replacement value, and, since people still need a place to live, investors scooped up foreclosures and expanded a new institutional asset class, the single-family rental home, or SFR.

However, during the recession of July 1990 through March 1991, home prices fell by a minimal 0.9 percent because the factors then in play were temporary, and not directly related to housing demand. These factors included rising interest rates and a spike in oil prices due to the invasion of Kuwait.

In the other three cases analyzed, home prices actually continued to rise throughout the recessions, notably in times of higher inflation (such as in 1980 and 1982) or when the recessionary impacts were limited to a smaller group of people (such as the Internet stock bubble burst of 2001). 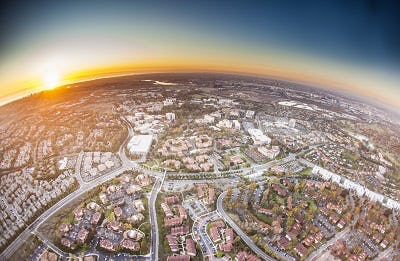 Looking into 2019 and beyond, there are zero parallels to 2007 or 1990. The U.S. economy is continuing to grow, albeit at a slower pace than in 2018.  Interest rates remain low by historical standards (and are still retreating), inflation is under control, today’s mortgages have much stricter underwriting standards, and the country, as the world’s top producer of petroleum, is no longer as vulnerable to sharp hikes in oil prices.  When the next recession does occur, its most likely culprit will be a simple repeating of the business cycle, thereby allowing population growth, consumer demand and wages to catch up with supply.

For the housing market, CoreLogic’s most recent forecast for 2019 is calling for a rise in the median home price of 3.4 percent – certainly less than the average annual growth rate of 5.8 percent noted in 2018, but far from a decline.  Moreover, with national inventory remaining tight at 3.7 months of supply and the huge millennial generation accounting for an increasing share of home sales, housing demand is expected to outpace supply regardless of which direction the general economic winds blow.   American households will still need a place to live.

TTLC is focused on addressing this ongoing housing inventory shortage through a variety of housing opportunities with our builder partners, especially for entry-level and moderately priced homes.  In more urban areas, we are focused on increasing housing inventory by re-imagining under-utilized and functionally obsolete properties to new residential uses.